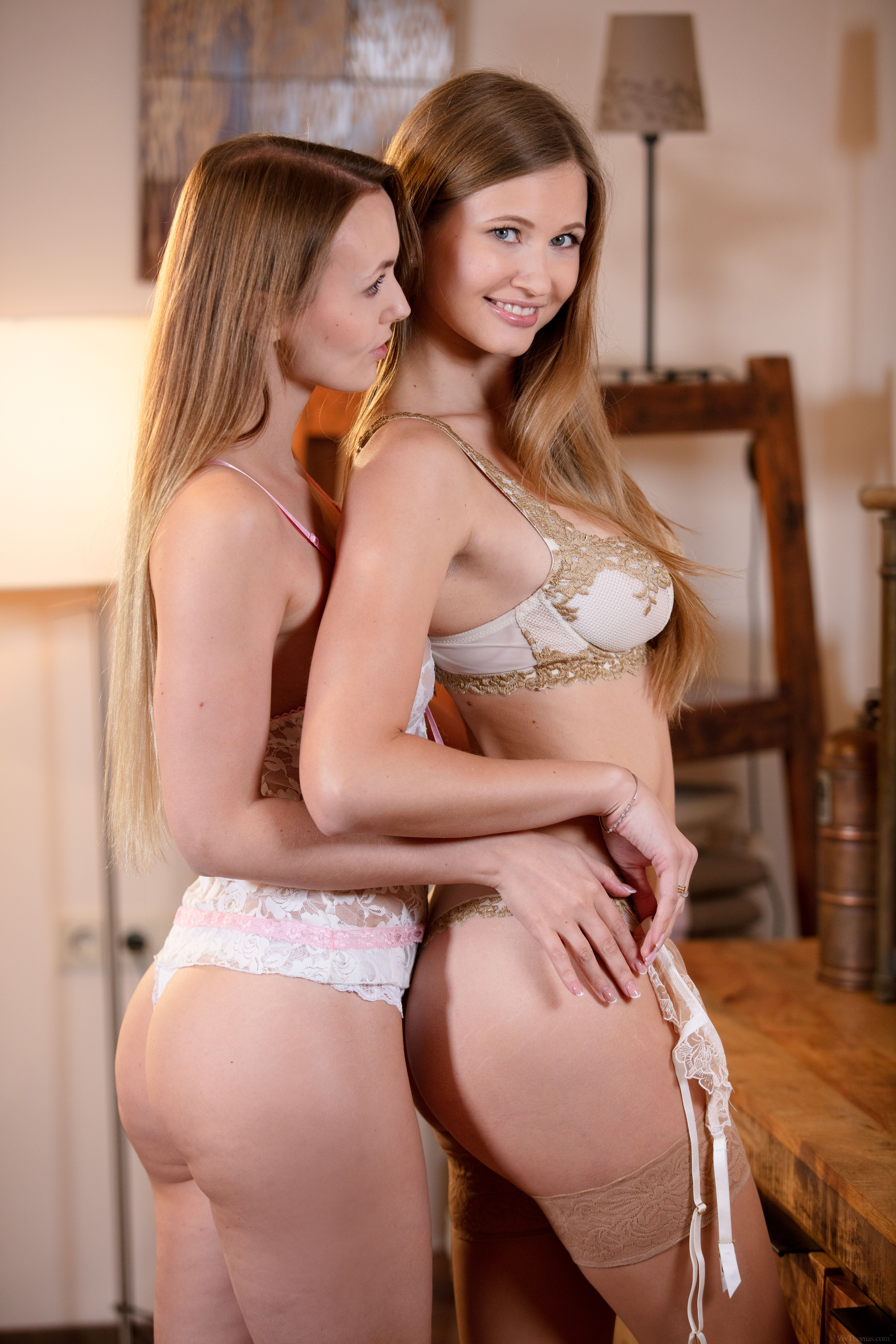 It was 3AM and a tongue was at work in the liquid depths of my pussy.

‘Angie?’ The clouds of slumber were slow to disperse.

‘Mmmmm,’ came the reply, ‘you came in your sleep, and it seemed a pity to waste it.’

I stretched sleepily, basking in the warm afterglow of my fading orgasm and the lush sensations that her probing of my pink folds were adding to the mix.

‘Who were you dreaming about?’

I giggled and stared at the barely visible ceiling. ‘You.’

‘Liar. You always say that!’

A jolt went through me as her fingers parted my pussy lips and the tip of her active little tongue brushed teasingly against my clit.

‘Well, it’s true.’ I was so wet that I could feel an oily slick running out of my pussy and down between my buttocks. Her soft lips kissed some of it away and began to work their way back towards my pussy – at an agonisingly slow pace.

‘You taste so nice. What about Elaine and Andrew?’

Or a breath. The quietness of Elaine asleep, the softness of her pillowy breasts against mine; the feral warmth of Angie curled up beside me; the hardness of Andrew, spare and lean. I reached down and held her head close against the fire between my legs. Her breath was no less hot.

‘I love you deeply and completely, and you know that,’ I chided. Angie could be maddening when she was like this.

In response, her tongue carved a wet lane of passion through the receptive inner folds of my sex.

Maddening, hot and utterly desirable. I felt the first warmth of an impending orgasm lick its way into my pelvis, and I wrapped my fingers in her hair, enjoying the feeling of its silken slide across my palms.

The tip of her tongue did a quick circle of my clit, before tripping over it, so tenderly that it almost didn’t touch. I didn’t even have time to squeak before I felt the rollercoaster hit, so I just held her tight, feeling her fingers pinch my nipple as I came in the briefest, sweetest mini-orgasm. It was like choosing my favourite chocolate from my favourite selection, and finding it had been replaced by something even better. A few seconds later, I giggled as the waves of my climax washed away. ‘Help me do that again. I need more.’

I eased my hips up as she slid a pillow underneath me, and I felt her lips against my ear.

‘I am going to lick your anus.’

‘I knew you were naughty the moment I met you!’

She kissed me hard on the mouth, her hand on my breast, and then I felt her lips suckle my nipple. Outside, the sky was becoming lighter, but in the darkness of the bedroom all I could see was a mass of hair, and I stroked it as I felt my breast begin to tingle.

‘I love it when you come when I am doing this,’ came a muffled voice.

‘I love it when I come when you are doing anything.’

She moved across to my other boob and I held it for her so that she could take the areola completely in her mouth, her tongue flicking my nipple, which stood achingly erect. I wanted her desperately.

Angie’s fingers slid slowly down my belly, over the firm prominence of my mons, and into my waiting pussy in one smooth movement. She bit my nipple gently as her fingers slid inside, my lips parting to accept them even as they greased them, easing their invasion until she was two knuckles deep. Then I felt them begin to move, slowly but steadily, pressing upward in the very middle of each stroke, the soft skin of her palm rubbing against my clit with each movement, sure and precise. 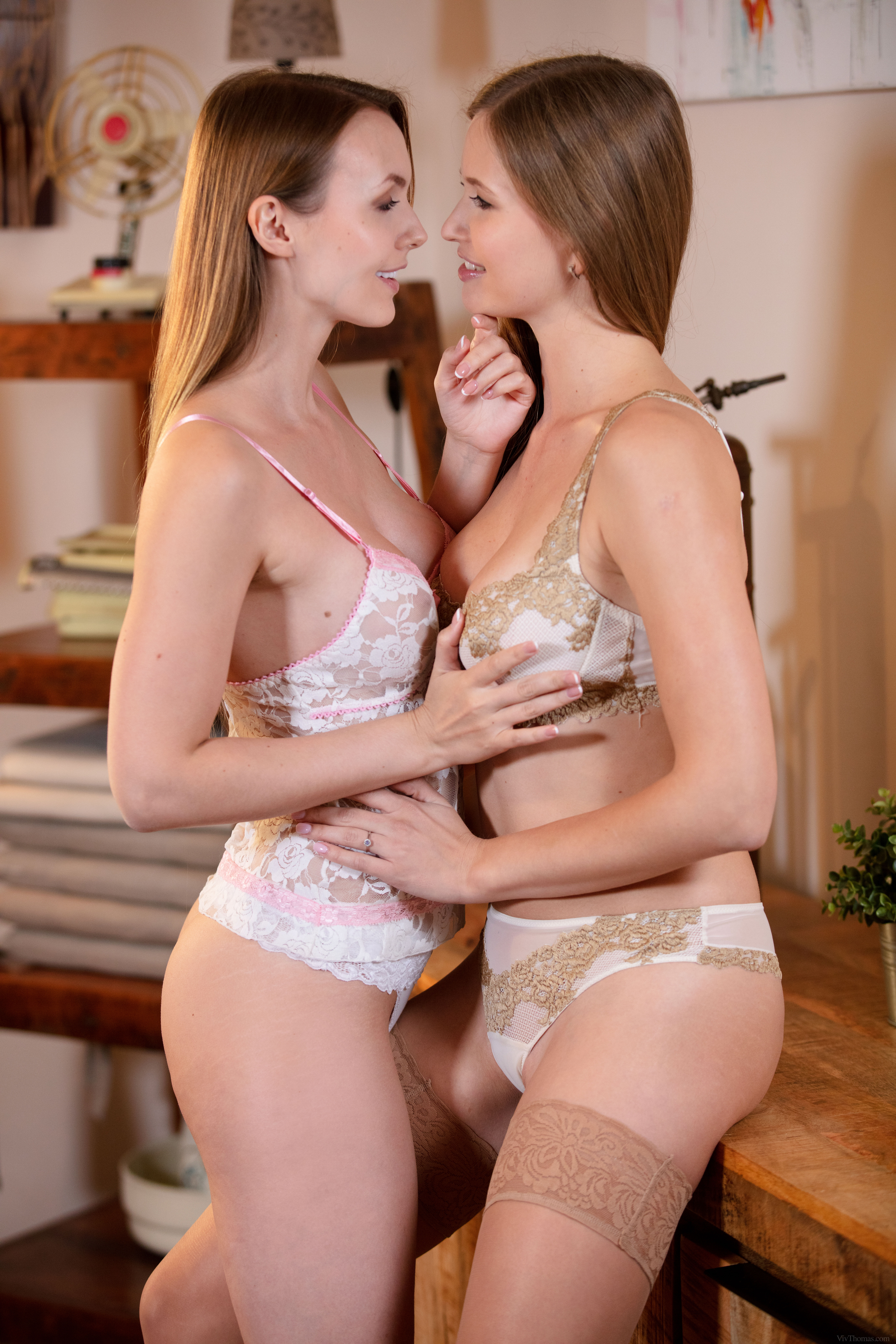 I am glad that I discovered girls. Sex with guys isn’t better, it isn’t worse, it is just different. I could feel another orgasm building and I told Angie so. She lifted her head from my breast and kissed me hard on the mouth, before holding her face close to mine. My gaze melted into hers.

I felt her fingers speed up – her timing was amazing, as it always is. She knows my responses better than I.

My orgasm oozed through me as she said the word, ‘…come.’ It simmered into existence, a transition so fine that it was impossible to identify the moment when it began, or even when it was over, except that it is never really over with Angie. The movement of her fingers paused until the peak was past, and then the slow massage began again. A peak of pleasure, followed by a rippling blast of warmth that began with a small, incandescent orb in my pelvis and ended with a hot, sweaty, aching glow in my boobs, and then it was gone.

Angie searched for something in the drawer, before straddling me in a 69 with her wet pussy pressed against my face. Her sex was hot and welcoming and by the time she came a minute or so later, her musky secretions were running down my chin like the juice of an overripe mango.

I could feel her fingers on my clit, but – as so often happens – the boundaries between what is her and what is me had blurred, and so, as she came, so did I. To have sex like this is to dive into the same pool of shared arousal, and each and every time I am granted the wish to swim in such intoxicating waters, I wish less and less to leave.

If Xanadu exists, I know the address.

I felt Angie’s fingertip touch my nose, as she swivelled her hips away from my face. ‘I always keep my promises,’ she said, settling down between my legs.

‘I know…’ I sighed. She is the most teasing, frustrating, warm, maddening, enticing, and unique lover I have ever had. We are all different, but only she can balance these qualities and reinvent the mix every day.

Something warm and hard touched my clit with a buzz that had me gripping the sheets and hanging on for dear life. Tingling with the lingering arousal of our last orgasm, I let out a gasp load enough to wake the house - it did - before her tongue found my anus.

The orgasm came like a lightning bolt out of clear blue sky, so unexpected that for a count of three, all I could do was arch my back and wait for the blast with my breath held and my fists gripping the loose folds of the sheet. The first jolt exploded out of my pelvis, punching into my abdomen and chest, before an overwhelming wave of molten pleasure flooded in its wake, shocking my senses with each pulse, going on, and on, and on, as my first orgasm blended into a second and then a third.

I was still shaking when it was over, and I kept my eyes tight shut so I could enjoy the feeling of the pleasure ebbing away to the max. Then, slowly, I let my breath out.

I felt Elaine’s hair brush my face, and then her lips. ‘Was that nice?’ she asked.

I opened my eyes and smiled at her lovely eyes looking down at me. I bit my lip, and told her, ‘I had a dream…’

A dirty little laugh came from under the duvet, which turned into a scream, ‘Andrew! Stop tickling my feet!’

Another day had begun.